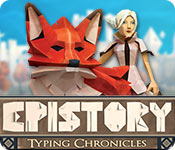 Epistory immerses you in an atmospheric action/adventure game where you play a girl riding a giant fox who fights an insectile corruption from an origami world. As you progress and explore this world, the story literally unfolds and the mysteries revealed. Epistory is a typing game that tells the story of a writer lacking inspiration. You play the muse, tasked with helping her finish her book Epistory won several awards for its innovative mechanics, gorgeous 3D art style and soundtrack. It also got an honorable mention for its visual art at the prestigious IGF 2016. To get the most out of Epistory, play with the graphics on "fantastic" mode.