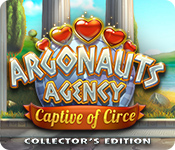 One quiet morning, a courier appeared at the threshold of the Argonauts Agency. He brought a wedding invitation for Jason and Medea from their old friend, the collector Pelias. Hidden in the letter was a secret request for help. Jason and Medea can’t leave their friend in trouble! Join the Argonauts, learn the story of Circe and free her prisoners!